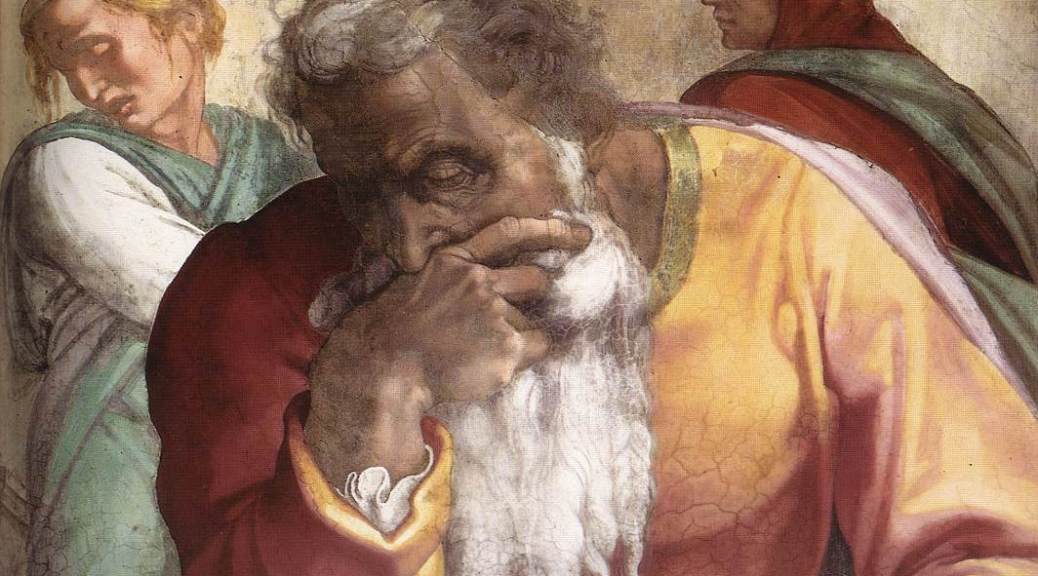 Maybe you’re on the sad long road toward divorce. You’ve done everything you can think of to resolve the problem, but it just seems inevitable.

Maybe you watch as your mother fights a protracted battle with cancer. Has God just walked out on you and your family?

Maybe you’ve struggled for years with depression and suicidal thoughts. No therapy or drugs or prayer seems to be helping.

Maybe you’ve been slandered by friends at school or at work or at church and they’ve dragged your name through the mud. You feel like trash right now and you just want to disappear.

“Everything I had hoped for is lost!” You get it. And you’re asking the tough questions that come with this place in life. Jeremiah seems to have been asking those questions too. In Lamentations 3, we get a peek behind the curtain on the answers to those questions. Jeremiah the prophet is writing here after his whole country has been destroyed and his friends and family have been taken captive. Yes, it was because many in the nation kept sinning against God, but this didn’t take away the hurt. What a devastating time for this prophet — everywhere he looks there’s pain and trial. So he laments; he cries out to God. Everything has been taken away from him. It’s a nightmare that he can’t wake up from. He keeps pinching himself and saying, “just let me wake up and this all be over. Please, oh please!”

In Jeremiah’s pain we begin to see answers to these common questions we ask when we’re in trials:

How do I re-engage with God when I’ve totally lost hope?

This is where I’ve found myself time and again over the past month or so. When so many people you’ve ministered to and alongside suddenly turn against you and you feel hurt and discouraged, you know that you need God. But where do you start? God feels distant, mean, or uncaring. You feel like you can’t just pick up where you’ve left off with him. Things were different then. Now you’ve got this insurmountable and unavoidable pain in your life. And you’ve got to figure out how to make sense out of what’s happened and re-engage with God. Jeremiah re-engages with God in two ways.

First, we must overlay our grief with God. We’re not called to ignore our grief. Jeremiah thinks of his grief like a deer which has been shot in the guts (Lam. 3.13). It reminds him of the nastiest thing he’s ever tasted (19). He even goes back to discussing his grief (c. 4). We’re supposed to be brutally honest about it. We need to talk about it. But we must place God over top of it. Think of those science books for children that had plastic overlays of the digestive or circulatory systems which could be placed over a picture of a person. I think that a lot of times, we look at God as a separate paper page. Either we turn to God and forget our grief, or turn to grief and forget God. But God and grief are meant to work together. In the moments of our greatest grief, God is there. The Gospel shows us this at the cross. God and grief play well together because he knows what grief is all about. One could even say that he is acquainted with it (Isa. 53.3).

Second, we must rediscover God. Often it’s in the times of darkest trials that when we begin to see the person of our God with greater clarity. His love is steadfast, his mercies are endless, his faithfulness (or, reliability) is great (22-23). As you find who God really is you will find hope. Our trials show us that God isn’t just the ignorant grandfather in the sky; we want him to care about sin and injustice and to right the wrongs. Our trials show us that God isn’t the angry policeman in the sky; only when everything else is stripped away can we see the care and love of our Heavenly Father. The Gospel shows us God is a God of justice who won’t let sin slide, but that he’s a God of compassion and mercy who took the penalty of sin on himself.

Will I be able to make it another day?

Remember that each day will have its own challenges (Matt. 6.34 – “Therefore do not worry about tomorrow, for tomorrow will worry about itself. Each day has enough trouble of its own.”), but Jeremiah tells us that each day will have its own grace (Lam. 3.23a). Now the prophet doesn’t mean that God becomes different. What he’s saying is that our trials allow us to see fresh expressions of God’s mercy. You’ll see dimensions of his love tomorrow that you’ve never seen before in your life. You’ll screw up and need fresh opportunities for God’s grace.

But God gives us this grace day by day. This means that we can’t just ask for grace and coast for a month. We need to rely on him every day. It also means that there will come times when you feel like you’ve hit the wall and can’t make it any further. You’ll feel like your resources are exhausted. And then, like manna for the people of Israel, a new day comes along with fresh mercies. As you hear the alarm ring on Monday morning, your alarm isn’t the siren for the beginning of the Monday morning blues, but a signal for a fresh day of God’s mercies!

Where should I turn after I’ve lost so much?

Jeremiah tells us that there’s a treasure that we’ve overlooked (24). It reminds me of a time early in my married life when I was working for just over minimum wage and I could barely keep up with the bills each week. After a particularly stressful week when we’d paid for groceries on the credit card, I checked the mailbox that Sunday and found a letter that had likely been in the box for most of the week. It was my tax refund check. I’d been full of anxiety and worry all week long, but there’d been a check in the mailbox the whole time. I think we treat Jesus like this a lot too. Jesus is there to address your anxieties and worries, but yet we never bother to look for him until we’re in a bind. So God uses trials to show us that he’s all we ever need.

Let your newfound treasure renew your hope. With Jesus, you have everything; without Jesus, you have nothing. You may have lost your home or job, but no one can take Jesus away from you. Your husband may leave you, but Jesus will never leave you. Jesus is your everlasting portion when everything else is in limbo.

How am I supposed to respond?

Responses in the middle of a trial aren’t easy. I’ve heard it said that trials bring out what’s really inside of people. I’m not entirely certain of this, but I do know that trials force us to wrestle with unique situations that call for unusual responses. Often when everything falls to pieces, it’s hard to know whether your responses are right or wrong. A mix of emotion and spiritual struggle often result in actions that seem best at the time. Nothing’s simple. People that are on the outside of your trial looking in will be Monday morning quarterbacks about how you should’ve reacted to the suffering. But I like to think that God isn’t like that. Instead of standing with his arms crossed in the distance, he’s running full steam toward us, giving us every grace for every sin, every wrong response. But Jeremiah does give us some ideas on how to respond.

Jeremiah tells us that our response to God should be one of trust. Trust his goodness (25). He isn’t just able to bring you out of this trial whole. He wants to bring you out. Trust in his coming deliverance (26). He doesn’t work on our timetable, but this doesn’t mean that he isn’t working to deliver you. Trust in his sovereignty (27). The process and timing of our suffering has a maturing effect. God allows trials in our lives at particular times in order to prepare us for what’s next.

Our response to others needs to be humble. Don’t complain about your trial (28). If you complain, you’ll just draw attention away from what God’s doing and place all the attention on yourself. Don’t be proud (29). Be willing and able to admit wrong. Show grace to those who’ve hurt you. Don’t seek revenge (30). Let God right your wrong. Let him raise up people who will advocate for you.

But how on earth are we supposed to react like this? I don’t know about you, but this is a difficult calling. Frankly, I tend to be the type who’d love nothing more than to open a can of whoop-[rear] on those who’ve hurt me. But I’m enabled to respond appropriately when I recognize three truths about God. God has greater things in store for me ahead (31). I’ll lash out or walk away from God if I lose hold of this confidence. And this confidence in a future hope is driven by another truth about God. God is absolutely compassionate toward me (32). I can endure the most uncompassionate snarks from fellow-believers so long as I know that God’s compassionate arm is there to hug me when I cry, support me when I fall, and defend me when I’m attacked. This is my God. He’s so compassionate that Jeremiah says a third incredible thing about God. God doesn’t want us to suffer (33). Suffering is related to the fall, and the fall was not what God wanted for his people. He wanted so much better for us. And, guess what? God went to every length to ensure that your suffering will come to an end. One day our suffering will be glory because of this truth–God doesn’t send suffering on his people from his heart.

But what about the injustices that have been done?

The Gospel teaches us that God has seen us in the crosshairs of his wrath, but that he turned the anger of his justice on his own Son so that we might not only escape, but that we stand forever as righteous in the sight of the Most High God.