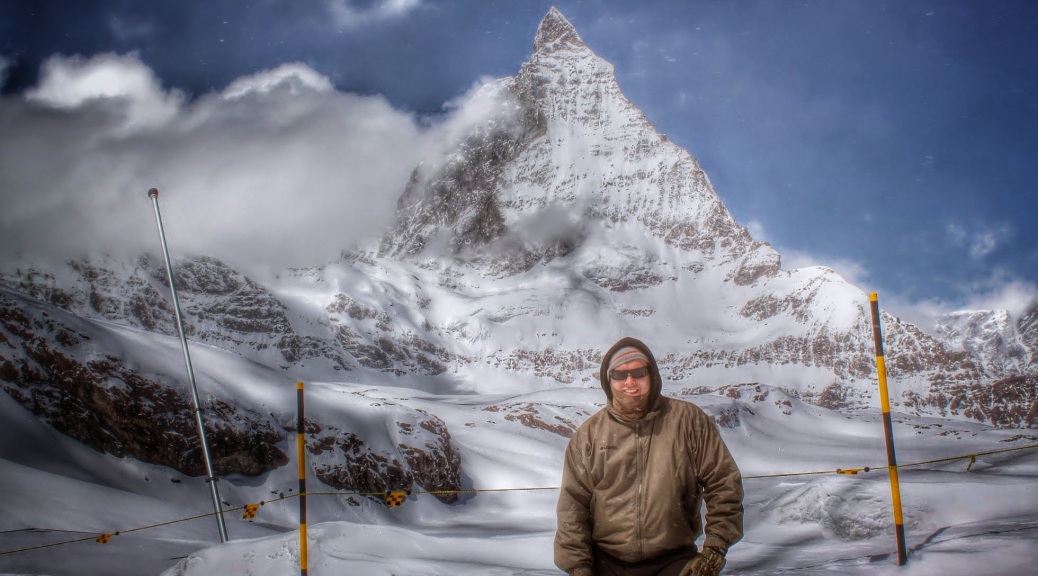 Yesterday I drove into the Alps. The climbing road in required that the car be driven onto a train which, serpentine-like, carried the vehicles like a mechanical monster under the mountain, belching them out above a verdant expanse of some of the most beautiful countryside

I’ve ever seen. The switchbacks on the descent pushed the limits of the BMW rental. Occasionally I’d stop at one of the many pull-offs in order to take pictures of the scenery. The stark snow-covered mountain peaks contrasted sharply with the lush greenery in the valley below, brought to life by melting snow and incoming storm.

The nail-biting road ended in the sleepy town of Tasch, which is where my hotel was for the night. The trip into Zermatt would have to wait until the next morning, requiring a trip on an electric rail or vehicle. My room was nice, but a little warm (in Switzerland it is common for hotels to only have heat and no cooling). So I opened the window and went to sleep.

This morning I awoke to find snow drifting against my window and powdered across the floor beneath it. Mountain-blown snow was descending on the warm valley and left the ground covered with the beautiful steamy dust. The feeling was surreal. I had some tennis shoes for hiking, but I wasn’t prepared for the higher-elevation snow. So I geared up with what I had, ate a light European breakfast, and grabbed the first train into Zermatt.

This touristy and expensive Swiss town was bustling, even during the off-season. Families with children, adventure sports types, and the elderly crowded the streets. First thing on my list was to find some hiking boots. I needed something comfortable that could withstand the snowy ascent into the mountains. One fitting and 120 Swiss Francs later, I had my hiking boots and was off to the trails. Even before heading up into the mountains, it became immediately evident that an adverse effect from the morning snow was taking place. Clouds had moved in from the mountains and combined with the melting snow. The end result was a thick blanket of fog that only allowed me to see about 100 feet at a time. But that was sufficient to start.

Winding up the mountain, I stopped a couple miles up the trail in order to wait for the fog to clear. Not wanting to bite off more than I could chew, I took an ascent break and rode a cable car through the dense fog up to an overlook. At the overlook, I was surrounded by delighted skiers and hit by a blistering snow-driving mountain wind. It sliced through my clothes and chilled me to the bone. I had hoped to be able to see the Matterhorn from here and was largely disappointed. I still couldn’t see a thing! But before I

headed back to the cable car, I glanced behind me and saw that the wind had just moved out some of the thick white cover. And there it stood! The scimitar-curved finger pointing to the heavens. I stood and stared, took pictures, and stared some more.

When I finally turned to head down into the valley and resume my hike I was already stunned by the majesty of the massive mountain. But on the descent, the most amazing thing happened. The fog I had been fighting below had broken while I was at the overlook, but a thin layer of cloud lay between the mountain overlook and the valley below. As the cable car descended, we broke through the cloud and a jaw-dropping awe-inspiring expanse lay glittering below. The craggy mountains on my left and right stood out against

the fresh snow and grassy slopes below. There was something gut-wrenching about that moment. Something bigger and more meaningful than so many of the petty goals and achievements that I’ve vested with ultimate significance in over the years.

“Men go abroad to admire the heights of mountains, the mighty waves of the sea, the broad tides of rivers, the compass of the ocean, and the circuits of the stars, yet pass over the mystery of themselves without a thought.” (St. Augustine)

Holding back tears, the immensity of what I’d seen moved me emotionally. It seemed like God had placed a mighty finger pointing to him on the mountaintop, and a rolling parchment below that told the story of his greatness. How could someone walk away from this beauty and wonder if there was a God? How could all this happen by accident — mere chance? Why is it that every person I know who looks out at a wonder of nature such as this and feels in their

heart a sense of gasping awe and yearning desire and inexpressible joy because of the beauty they see? But it isn’t like we can eat it or drink it — that it actually meets a material need of a purely physical body as it stands. It doesn’t do anything for us, but yet it meets a need of our souls — the immaterial part of our being. Perhaps the astounding beauty of the Alps is a crack in the wall of our materialistic dwelling, pointing us to something greater outward and upward. Simply stated: if I find in myself a craving for something unexplainable and immaterial, I must conclude that this is an echo of something even greater and more unexplainable that alone can fill that deep desire of my heart.

I lift up my eyes to the mountains—
where does my help come from?
My help comes from the Lord,
the Maker of heaven and earth.

This thought was one that I couldn’t shake throughout the remainder of my 10 mile meander through the Alps that afternoon. I dedicated this day as a visual reminder of the grandeur of God and my inborn desire to find revel in his unimaginable and unfathomable greatness.

By awesome deeds you answer us with righteousness,
O God of our salvation,
the hope of all the ends of the earth
and of the farthest seas;
the one who by his strength established the mountains,
being girded with might;
who stills the roaring of the seas,
the roaring of their waves,
the tumult of the peoples,
so that those who dwell at the ends of the earth are in awe at your signs.
You make the going out of the morning and the evening to shout for joy.
(Psalm 65:5-8)